Having Fun with Authors and Illustrators 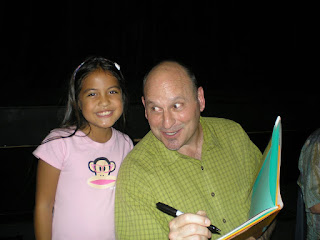 Jon Sciesczka, David Shannon, Mac Barnett and Adam Rex kicked off their book tour here as part of a benefit for our new local library.  I took my book-loving pal, Alexia, with me, and the guys did not disappoint.  There was a little something in their presentation for everybody: parents, kids, aspiring illustrators, authors and picture book fans of all stripes.  And did I mention they were all very funny?
Alexia chose the Scieszka/Shannon collaboration, ROBOT ZOT.  She was so thrilled to get their autographs, she kept hugging the book to her chest and smiling.  When Alexia visits my house, she usually writes and illustrates at least one book, sometimes two.  Perhaps she'll be the one signing autographs someday.  If so, I'll be first in line.
Posted by Kathleen O'Dell at 7:11 PM 2 comments:

The Glendoveers Come to Life 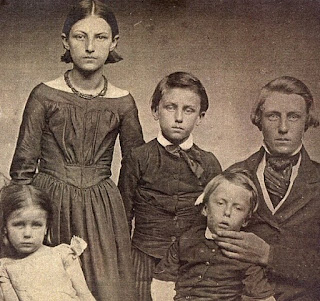 In my newest book for Knopf, I write about a fictional family called the Glendoveers whose children were kidnapped in 1855.  I had named the brothers and sisters already:  Frances, intense, unsentimental and scholarly, was the oldest daughter; gentlemanly and dreamy George Jr. was the eldest brother; Helen, the little sister loved sweets and dancing;  Arthur,the middle sibling was a restless climber of trees who would rather play outside than eat supper; and Peter, the youngest and Arthur's shadow, was dapper and loved his clothes.
In order to get some ideas of what the children would look like and how they would dress, I searched the internet for pictures of children from that time.  When I came upon this photograph of the Davis family of Cayuga County New York, taken in in 1850, I felt my skin prickle.  These were my Glendoveers--or, rather, my concrete image of them.  Now that my first draft is almost done, I've referred to the pictures so many times that I feel these children inhabit my story.
Of course, I don't know anything about the real Davises except that they were a handsome group--but I owe a debt of thanks to these children and to the direct, intelligent gaze of the eldest sister, who became a favorite character.
I'm guessing that the youngest children are being helped to hold still for the cameras  In the old days, pictures were not taken in the split second they are now.  The subjects had to stay motionless for seconds while the camera's shutter opened its eye to the light.
Thanks to the internet and a thriving community of amateur genealogists, family photos from all eras are available for us to view.  I don't know about you, but if the photograph is old and the subjects are compelling, I'm just as  fascinated by the images as if the people pictured belonged to my own family.
Posted by Kathleen O'Dell at 8:36 PM 2 comments:

My Theory About the Girl in the Hammock 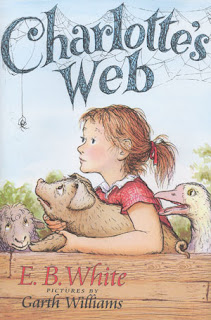 Do you know what?  If I were to write a story about the girl in Winslow Homer's picture, I would say that she was reading a book she chose herself.  Aren't those the books we abandon ourselves to--the ones we select as we would choose a friend?
Before I reached high school, every book I read that I truly loved was either a book I chose, or one that was read to me. The first book I remember checking out with my new library card was sitting in a cardboard box by the driver's seat of the visiting Bookmobile.  The girl on the cover had a messy ponytail, blushy cheeks and long eyelashes.  The cover was so pretty, I had to have the book for myself, though my mother would have to read it for me.
The book was CHARLOTTE'S WEB.  I'd never heard of it.  Neither had my mom.  But she read it to my brother and me every night, and it was by far the most absorbing, wrenching and delightful book I could ever imagine.  Picking that book out of all the books in that big truck made me feel like a lucky person--as if I were born with an instinct for choosing the best.  I've always liked combing through bookshelves, pulling out volumes that appealed to me for the quirkiest reasons.  I've found some gems that way, and I believe it is one of the best ways for children to explore books.
That's why I was thrilled to read in the New York Times about Lorrie McNeill, a middle school teacher in Georgia who has abandoned classroom sets of assigned novels for her classes.  Instead, the students may read what they want, including the much-maligned (unfairly, I think) CAPTAIN UNDERPANTS books.  Afterward, both students and teachers share their discoveries.  Books are passed around and borrowed.  Everyone is reading for love!  Can you imagine?
Children's writers have a stake in having their books purchased in volume for classroom reading.  When our books are on summer reading lists and assigned AR points, we benefit.  But do the kids?  I doubt it, though this is just my intuition speaking.  Observing how often early reading in schools is over-directed has always made me heartsore. It's the same feeling, for me, as seeing a wild bird in a cage with its feathers drooping.  I say, go discover!  Let your curiosity and your passion be your guide.
Posted by Kathleen O'Dell at 6:58 PM 2 comments:

The Girl in the Hammock 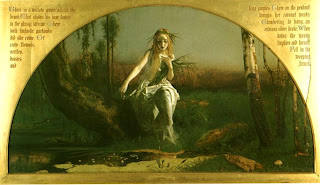 That beautiful Winslow Homer Painting at the top of the page, "Girl in a Hammock," is a favorite of mine.  I saw it first at the Los Angeles County Museum of Art during a Homer exhibition.  Have you ever seen a painting or a picture you wished you could live in?  That's how I felt about "Girl in a Hammock."  Note the sunspot lighting her book from her right; the greens dark and velvety in some places and alive with yellow in others.
There are other paintings with young women in deep green woodland settings, and they all appeal to me.  Take this Ophelia by Arthur Hughes, for example (above).  She looks like a fairy with that crown of weeds.
I live in a wooded neighborhood in an old Tudor house with dark wood panelling.  I made sure to get a velvet couch in the color of moss for my living room.  It's a lovely place to read--almost as good as a forest, but with air conditioning or a fireplace when you need it, and electric lamps to simulate that pool of sunlight.
Posted by Kathleen O'Dell at 11:37 AM No comments: